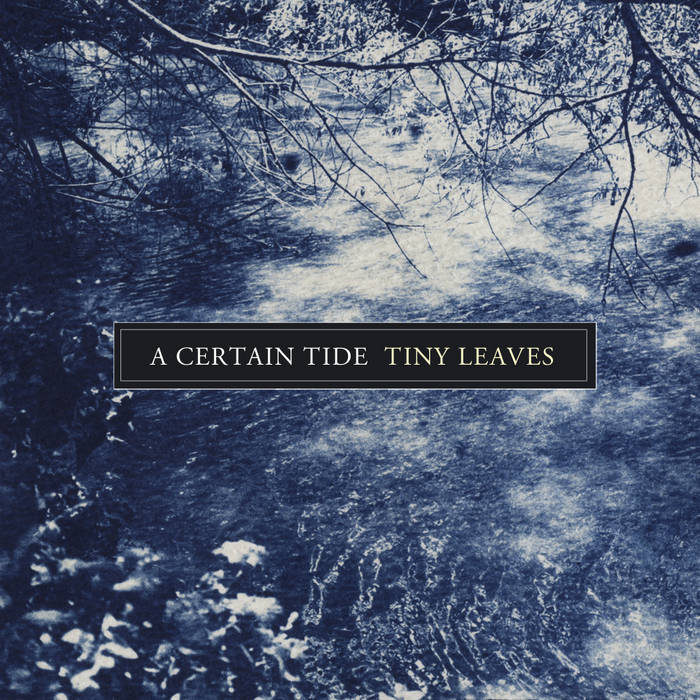 A Certain Tide is the second full length album from Tiny Leaves, the name chosen by UK based multi-instrumentalist and composer Joel Pike for his modern classical project. Pike describes his music as “being rooted in narrative” and for this album he invited a handful of fellow musicians to collaborate with him:

“Over a misty weekend in winter, composer Joel Pike aka Tiny Leaves, gathered a few of his favorite musicians deep in the Shropshire countryside. Together they laid down A Certain Tide, the anticipated second full length album from Tiny Leaves. The album captures a special moment in time, recorded over a few hidden days. It was here that the tracks were played live for the first time and the resulting recording carries a hopeful, fresh and intimate sound. The album became a whole, threaded through piece by piece, making it play almost as one long song.”

Right from the opening track, ‘Enfold Me’, the album bursts to life with insistent chords hammered on the piano quickly followed by swelling strings. Musical prose and dialog flow through the album with real impetus. Often the instruments seem to converse. The piano calls to the strings and they answer. The cello speaks to the violin and it responds. We particularly notice this on lively tracks such as ‘Dust’ or ‘Paean’ which nearly bursts with feverish intensity. On ‘Lean Not’ delicate guitar shadings become increasingly intense and discordant while the placid strings underneath never waver, thus introducing an element of conflict into the narrative.

There are also many graceful and introspective moments to enjoy, such as the pastoral beauty of ‘August’ or ‘Hidden’, a particularly lovely piece with overlapping layers of shimmering guitar and muted, plucked strings. The middle passage of ‘Stepping Into’ seems especially inspired with dramatic effects underpinning a gorgeous string section.

Ultimately, A Certain Tide is stirring and uplifting. It brims with life and one can feel the earnest striving in it driven by inspired performances from the musicians. The album is available both digitally and on CD with attractive cover art by photographer Heather Polley.

Listen to ‘Stepping Into’

Watch a teaser video filmed during the making of the album: