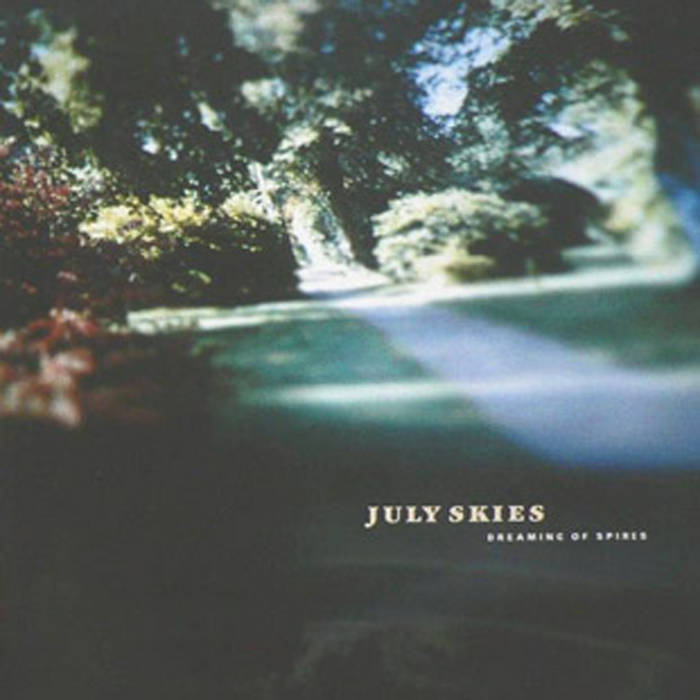 On our musical journeys some albums become mile markers, touch stones that we can go back to to reset our musical compass to true north. For me, Dreaming of Spires by July Skies is that kind of album. Lest anyone familiar with my listening history think I am being disingenuous, it took me years, too many really, to stumble upon it. But from the first time the refrains of ‘Swallows and Swifts’ washed over my ears, I knew I was hearing something special. Originally released in 2001, Dreaming of Spires manages to distill the pastoral beauty of the English countryside and a palpable sense of youthful wonder into musical form, which is just what Antony Harding had in mind from his earliest beginnings of the project which was later collaborated on by others, including Ben Holton and Robert Glover of epic45.

Everything seemed possible at the end of youth and there was a need to capture feelings and a growing interest in exploring towns, villages, ruins, abandoned places and the countryside through sound. Frustrated attempts on an old Spanish guitar ensued. In 1997, I bought a Fender Stratocaster (originally owned by Pete Holder from the Birmingham band Anarakula), a battered delay pedal, learnt a few chords and created July Skies with the aim to release a 7″ record… – Antony Harding

The album is now being reissued on 180g vinyl by Rocket Girl, presenting an opportunity to go back and touch the stone and rediscover these wonderful tunes and share it with any readers who have not had the good fortune to become familiar with them.

The first four tracks form a pristine opening coda. First, the warm sweeps across the guitar, the ethereal, airborne vocals, and the phantom weather report of ‘Coastal Stations’ followed by the resplendent chorus and reverb of the guitars in ‘Swallows and Swifts’, which conjures the image of a patchwork quilt of verdant green fields and golden rapeseed unfurling beneath cerulean skies.

‘The Night Sky’ and ‘Garden Constellations’ follow taking the listener through the quiet hours of the evening gazing heavenwards, each drawing on very specific inspiration:

The track was also inspired by the imagery of the Ladybird book The Night Sky which exquisitely captures the beauty of the stars in an inky blue sky against the silhouette setting of the town and country. Musically, there’s a definite reference to an under-looked compilation track Love 2 Love by Sun Electric released in 1994. Garden Constellations purposefully follows, it’s about waking in the garden to the post 1 am sky, deeper and darker, with the only sounds being those of the distant bark of dog or shriek of foxes drifting across the gardens. – July Skies

Unhurried and mellifluous, the album continues to wind it way forward, the melodies and atmospheres not just capturing the aura of a very special part of the world, but also a way of being in it and moving through it in tune with the stillness and wonder of each moment. The music soars again in the uplifting rhythms and dreamy plumes & swells of ‘East Kennet Skies’ and the tender guitar lines of ‘Southern Orchards’ before concluding with a nod to the haunt of history in the ambient, gothic-tinged ‘The Ruined and Disused Churches of Norfolk’. When life is moving too fast or when I forget what I enjoy about transportive & uplifting music – I will return here.

Inspired by the lanes, countryside, villagers and lost airmen around the WWII airfields of East Anglia, The English Cold is the second album by July Skies. It is slightly more lush and cinematic than Dreaming With Spires and includes contributions from epic45, a band formed by longtime July Skies collaborators Ben Holton and Rob Glover. Personal highlights are ‘Countryside of 1939’, ‘East Anglian Skies’, and ‘Waiting to Land’.

The Weather Clock is the fourth album by July Skies and also features contributions by epic45 and returns to a more pastoral, dreamy mood. ‘See Britain By Train’, ‘Distant Showers Sweep Across Norfolk Schools’ and the effusive and stunningly emotional ‘Skies for Nash’ are absolute highlights. The album ends with the touching ‘To My Love’ which features a poem written by Harding’s grandmother Edna Taylor (read more about that here).