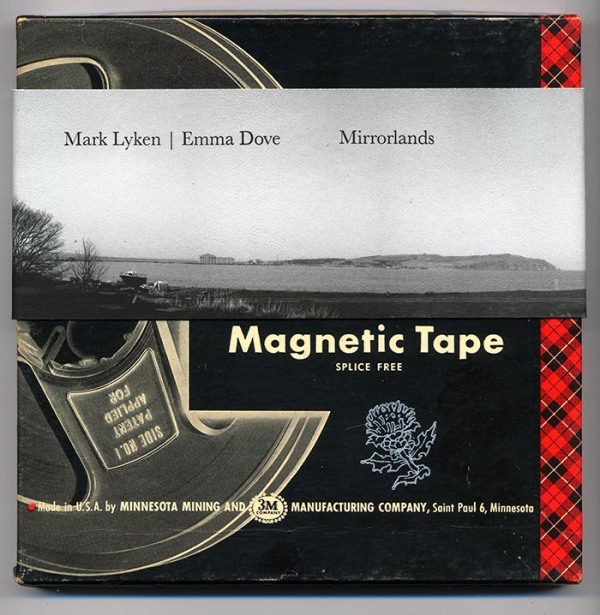 Tucked into a recessed portion of Scotland’s eastern coastline, Black Isle is a peninsula that sits between the windswept Highlands to its north and the city of Inverness and the Great Glen to its south. The waters of the surrounding firths are traversed by dolphins, porpoises, seals, migrating whales, cargo & cruise ships, and fishing boats as well as serving as home to oil rigs. Its land mass is home to woodlands, rolling hills, farms, castles, and towns. The name possibly derives from a consequence of its mild climate which often leaves it devoid of the whiteness of frost and snow that may surround it during the winter.  It is a place which intertwines the threads of a multitude of narratives both natural and man-made.

Mirror Lands is a film and sound installation created by multimedia artist Mark Lyken and filmmaker Emma Dove that focuses on that place and those narratives. It was one of 14 projects across Scotland supported by Creative Scotland’s Imagining Natural Scotland initiative. Music and sound are both integral to the project which Lyken has referred to as sitting “somewhere between and art film and a documentary” and that part of the experience has now been extended into a soundtrack album artistically packaged and released by the creative hands at Time Released Sound. The key to fully appreciating this wonderful recording is first understanding the impetus of the film.

The film is narrated by first-person accounts, memories, feelings and perceptions of the Black Isle from a diverse range of local voices – from retired Lighthouse Keeper to Marine Biologist  – contrasting perspectives on a common place. Preconceived ideas of Highland life are challenged and the complex interactions between nature and culture are brought to the fore in this unique audio-visual experience. – Emma Dove

Film Trailer (ft. excerpts from ‘Crom Queen’ and ‘Fishing For Rigs Part I’)

The film was not intended to be viewed as a static experience. It was screened in an installation format which encouraged its audience to move about the room, allowing the change in sonic focus to affect their perceptions of what they saw on screen.  In a sense, this soundtrack release, while it stands perfectly well enough alone as a cohesive album, becomes a similar extension of the project – an alternate way of inviting observation and perception about the same subject.

We are first transported through sound to our destination by ‘Crom Queen’, the opening track which refers to the Cromarty Ferry that runs between Black Isle and Nigg, the “notch” at the southern tip of the Highlands that marks the entrance to the Cromarty Firth. The musical themes are then introduced with the beautifully minimal piano lines of ‘Fishing For Rigs’ parts I and II, imposing a stillness that helps put the listener in the frame of mind of the careful observer.

The piano remains the binding element and primary narrative voice, appearing in a variety of contexts and timbres to shape the mood and steer our perceptions.  Field recordings, human voices, classical instruments, electronics, and processing are used to powerful effect, juxtaposed to tell the story of the relationships that develop between nature, industry, and man all the while keeping us firmly rooted in a sense of place.

Whether the title is intended to refer to this or not, this is a mirroring effect that takes place in which natural and industrial sounds become almost musical and musical instruments seem to emulate nature or machine.  This remarkably evident in ‘These Trees’ which begins with what sounds like wind rushing through a woodland canopy and gradually segues into a babel of overlapping human conversations. Another example is ‘Firthe was Black With Oil’, a piece drenched in viscous ambient textures, sonar clicks, and throbbing percussive pulses. What of these sounds are captured and which are generated? Perhaps that is a question Lyken and Dove want us to ponder as we listen to this captivating piece.

Listen to ‘Firthe Was Black With Oil’

The invisible camera eye continues to roam – a passing cruise ship (‘Exit Carnival Legend’), the chugging clockworks of an oil rig (‘Driller in the Dock’), the singing men of ‘Chenry Hoose’, and a cacaophonous flock of birds (‘That Geese’).  There are brief melancholic interludes which serve the flow of the album well, but which the imagery of the film would likely make even more powerful (‘Dirty Gertie No. 30’, ‘Last Man Standing’) and a fine centerpiece entitled ‘Douglas’, no doubt a nod to the last keeper of the Cromarty Lighthouse, Douglas Matheson (1920-2013) to whom the album is dedicated.

Mirror Lands is a rich and diverse sonic portrait of a rich and diverse place. Its musical underpinnings eloquently maintain and direct our focus without ever getting in the way of the story that the sounds of Black Isle have to tell. It is an enthralling and thought provoking journey.

The deluxe version of Mirror Lands (only 65 copies) created by Timed Release Sound enriches the experience by packaging the CD in a vintage 7” square reel-to-reel tape box filled with vintage prints of the Highlands of Scotlands, antique fold out maps of the country, and pages from a 100 year old travel book and a printed link to a private viewing of the film. A standard digipak version will also be available (limited to 100 copies).