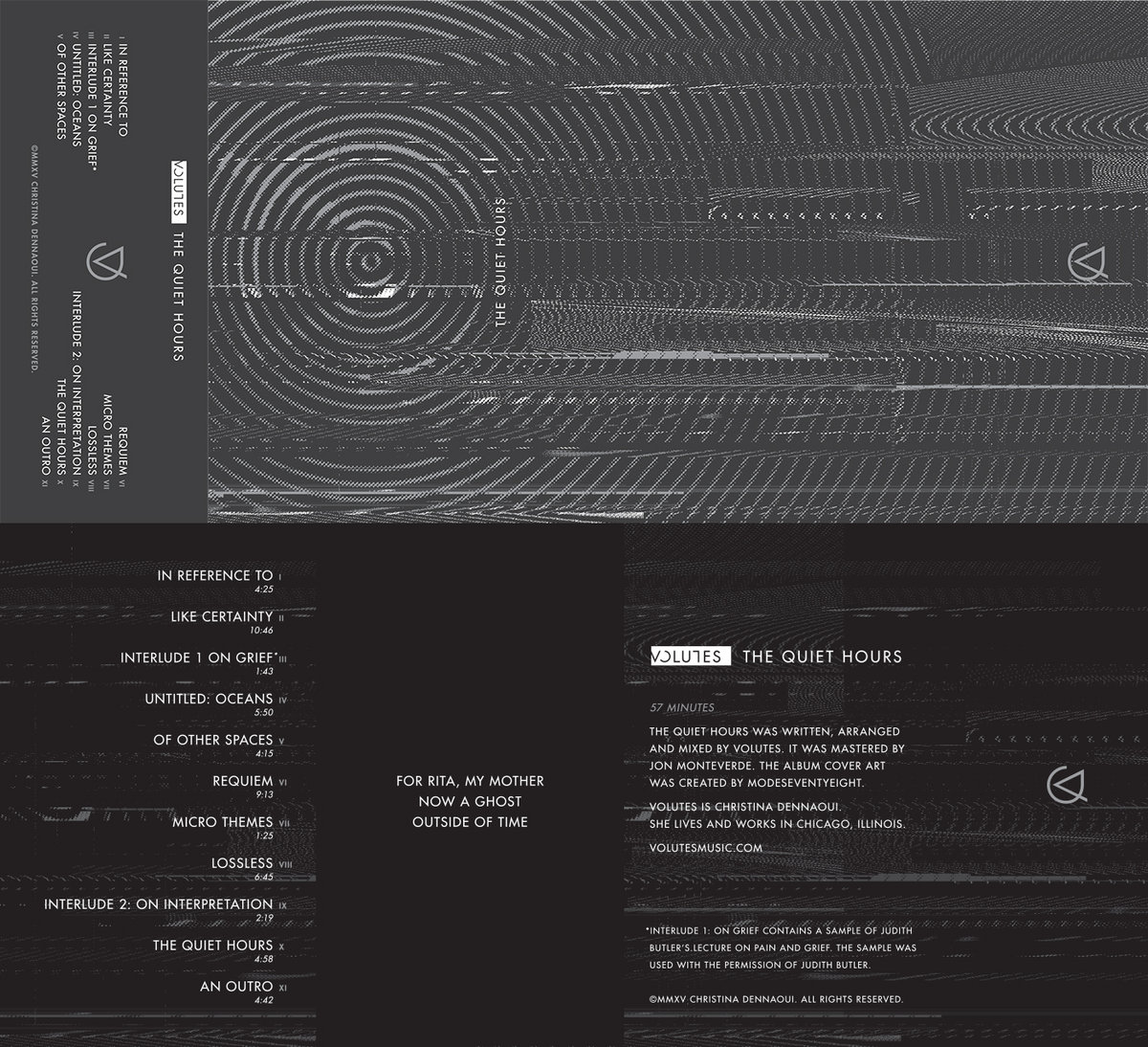 Volutes is an electronic music project created by Chicago-based Christina Dennaoui which is described as a “mélange of Middle Eastern drones and rhythms, minimal techno, jazz and field recordings”. All of these elements are in ample evidence on her debut EP (Elegant Grey) with a strong emphasis on the rhythmic component.  The Quiet Hours, however, is much more introspective and subdued by comparison, which is entirely appropriate for the deeply personal territory it endeavors to explore.

“The album is the culmination of nearly two years of grief, mourning and writing. It is an album about grieving and the transformative nature of grief. But at its simplest, it’s a eulogy for my mother.” – Christina Dennaoui (aka Volutes)

That succinct quote sums up what makes the The Quiet Hours such a mesmerizing, multi-faceted album that invites repeated, thoughtful listening.  At its core it is grounded in the fundamentally relatable human experiences of loss, mourning, and remembrance, all of which are expressed sincerely and eloquently. But, it also works on a deeply intellectual level as it wrestles in a surprisingly objective way with not just the emotions of grief, but with the nature of the process itself and how it inevitably transform us.

Dennaoui marks these themes very clearly with the insertion of two spoken word interludes – one lifted from a speech by Judith Butler who speaks of the ‘”unwanted transformation” of mourning (‘On Grief’) and the other from an interview with Edward Said in which he discusses the “task of interpretation” which seeks to give “some shape and sense” to our personal histories and the “infinity of traces” they leave upon us (‘On Interpretation’). The suggestion seems to be that the music is part of her own process to “compile an inventory” (Said, quoting Gramsci) toward that objective.

Sonically speaking, this is not an elegiac album. The layers are rich and complex and pulsing with intricate dynamics. But the beats, glitches, and effects do not serve so much to generate movement as to create a sense of friction and distraction as if to remind us that while negotiating the transformative stages of grieving, life is noisily and relentlessly moving forward. There is a distinct narrative and a sense of purpose, of searching, and of striving. In other words, it seems to be more of a chronicle of one navigating their way through a personal journey as opposed to a simple emotional catharsis or melancholic reminiscence.

With The Quiet Hours, Volutes has presented us with a sophisticated record that is daringly experimental but highly listenable and which fully engages our intellect while still managing to tug on our hearts.

The Quiet Hours is available in a limited run on high-bias cobalt cassette tape (50 copies) with custom artwork by Modeseventyeight, a Chicago based designer. For this in or near Chicago, IL, there will be a tape release show on Oct 15 at The Burlington.

1 reply to Volutes – The Quiet Hours