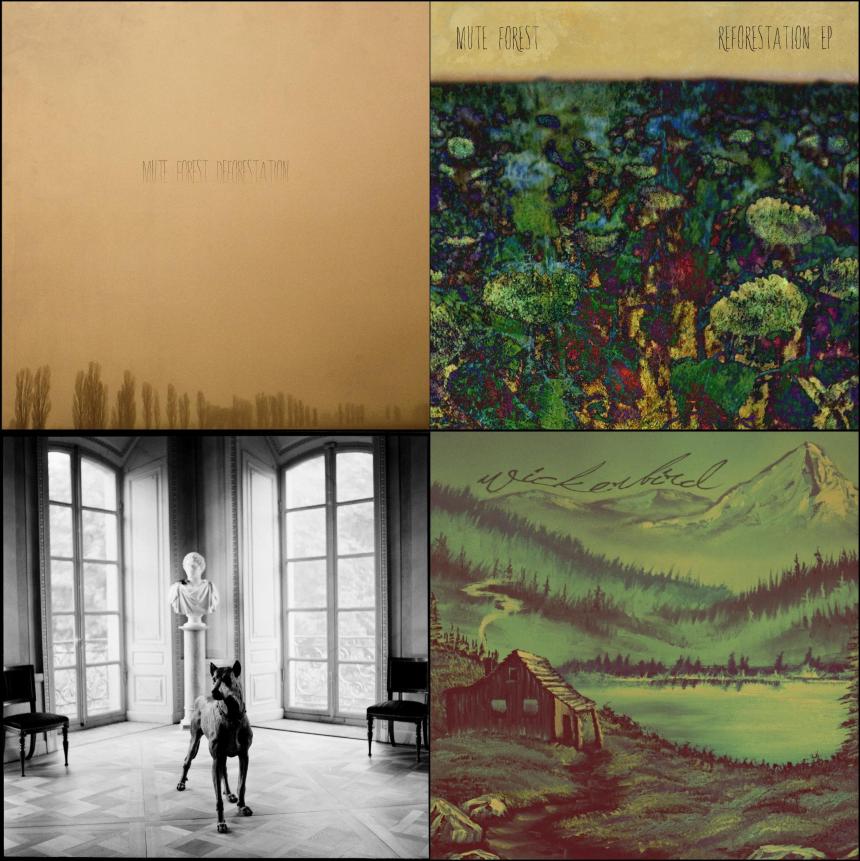 A journey with a group of albums all eminently suited for the waning of autumn into winter, each one balancing beautiful folk & pop song structures and warm analog elements with mesmerizing ambient textures and electroacoustic sound design making them as beguiling as they are affecting. Featuring Mute Forest, The Silence Set (Dag Rosenqvist & Johan G Winther), and Wickerbird

Mute Forest is a solo project from Denver-based musician Kael Smith (Mhombi, Khale) that blends nylon guitar and sparse vocals with field recordings and subtle electronics in a deeply introspective style.  After two EPs (Infinity Pools and Two Songs From a Lake Floor), he has created Deforestation, a full length opus as sprawling and hushed as the wilderness that inspired it.

In a seemingly ceaseless acreage near his childhood home in the Rockies of Colorado, Kael Smith (Mombi, Khale) takes a deep breath and listens critically to the forest. It is not the same sound he remembers as a youth…Since Smith’s departure to the city of Denver; the Mountain Pine Beetle has moved into these woodlands and decimated the trees; devouring their insides and leaving empty husks in its wake. It is among these thinned out swaths a word keeps repeating back to him, over and over, incessantly… ‘Deforestation.’ – Lost Tribe Sound

Deforestation will puts its hooks into you slowly and sink them in deeper with each listen. There is such an abundance of layered sound design and solid song craft here that something new seems to be revealed with every spin and Smith fuses it all together so organically, creating an affecting sense of both remoteness and intimacy. The mood is somber and heavily melancholic, but works its way toward redemptive beauty as moments of surprising grace break through to remind us that where there is decay, there is also hope for renewal.

Reforestation is the companion EP which offers two additional Mute Forest tracks and five guest artist reconstructions of Deforestation material, a wonderfully eclectic and smartly chosen group that includes Western Skies Motel, Porya Hatami, Spheruleus, and Kiln as well as the duo Mombi of which Smith is a part. New ideas and sounds sprout from the rich loam of the original material and new paths through Mute Forest’s sonic ecosystem are formed. The overall sound is indeed more lush and makes for a mesmerizing listen either on its own or contiguously with the main album.

Lost Tribe Sound is offering Deforestation on premium lacquer cut 180g vinyl in a package that includes a download code for the Reforestation EP and complementary images by photagrapher Christy Romanick.. Each album can also purchased seperately as a digital download (MP3 & FLAC). The albums were mastered by Taylor Deupree.

The Silence Set – Teeth Out

The Silence Set was formed three years ago by Dag Rosenqvist (Jasper TX, From the Mouth of the Sun) and Johan G Winther (Scraps of Tape, Tsukimono) with an agreement to take a very organic and open-ended approach.

Some collaborations start out with a fully formed idea of the end result. The creative process becomes something of a straight line, a mapped out road towards a clearly visible and tangible goal. The Silence Set didn’t begin this way. It began with total freedom, a tabula rasa in the truest sense. It began from a mutual respect and from an idea of working without limitations or boundaries. – Death Rattle Press

The fruits of this collaboration finally see the light of day in the form of Teeth Out released by mini50 records, an independent label based in Edinburgh and Belfast. The main components here are acoustic guitar, pump organ, piano, banjo and voice along with significant contributions from additional collaborators such as Nils Frahm (synthesizers and mixing), Kristofer Ström (trumpet on ‘Needles’), and Heather Woods Broderick (lyrics, vocals, and flute on ‘Worry, Glory’).

Anyone familiar with these two artists knows they are not ones to shy away from bold experimentation across a diverse sonic range from sparse abstraction to fierce intensity, so it may come as a surprise just how delicate and accessible this record is – proof that experimentation does not have to sound experimental. It can also sound warm and inviting. That said, there is a world-weariness in Winther’s voice and a willingness to generously explore the abstract spaces around the song structures that offsets the mellifluous passages that makes Teeth Out as engaging and thought-provoking as it is beautiful.

“Ruminations and stories and the sounds that came of them” – that is how Blake Cowan describes his Wickerbird project which drenches our ears in a dream like meld of acoustic guitar, field recordings, and layered vocals as lush and expansive as the Pacific Northwest where Cowan is based and feeds on for inspiration. The Leaf Maker is Wickerbird’s third album featuring this spellbinding sound. Cowan prefers to describe his albums in poetic abstracts and offers us this as the backdrop for the album:

“I’ve sailed here on a boat of broken boards, bourne aloft and made scabrous in the briny surf. I am this island, craven and lone and withered across the breadth of my borders, moldering at the creases where my sands meet the sea.” – Wickerbird

Anyone who has enjoyed The Westering (2013) or The Crow Mother (2012) will feel at home with the cavernous spaces and haunting vocals that Cowan has fashioned into his unique sound, but there are also incremental changes and a slightly sharper focus that serve it well and his knack for creating achingly beautiful melodies is even more acute. The lyrics are personal, but opaque and heavily laced with metaphor. Some will enjoy sussing out their meaning, though they are embedded in the music in such a way that one can listen holistically to the vocals as an additional instrument encapsulated in mystery. Whichever approach one takes, The Leaf Maker is truly stunning in its grand sweep and haunting melancholy.