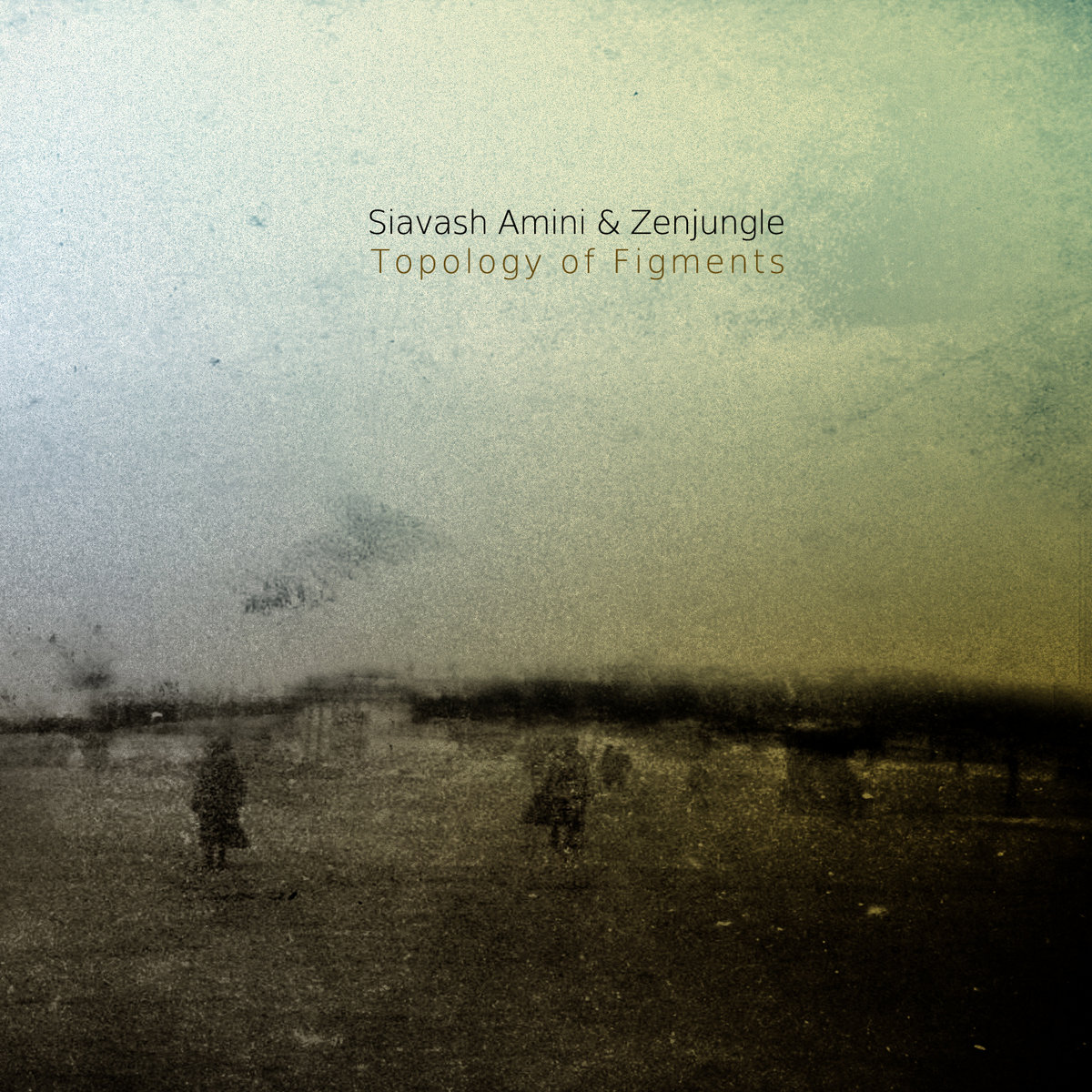 It was difficult not to become giddy at the prospects when this collaboration between Siavash Amini and Zenjungle (Phil Gardelis) was first announced by Flaming Pines. These are two of the most potent and expressive voices in experimental ambient and drone music on the scene today and the idea of  them joining creative forces was tantalizing to say the least. While it would not be wrong to say the end result exceeded my expectations, it is probably more accurate to say it obliterated them with the stunning and imaginative work of fearsome beauty that is Topology of Figments. The abstract  concept behind the record is the vivid exploration of the characters, places, and memories we invent and which become part of our personal and shared identities. Siavash and Phil explain it this way:

“Sometimes we cannot separate the imagined colors, textures, spaces, or even smells from what actually existed or exists.It’ s in such activities that we create spaces never imagined before; hallways, valleys, rooms, textures on a wall, a howling distant sound in a giant metropolis. These spaces can be thought of as explored but not owned by any person. No one has ever made claim to them. In these tracks we have tried to imagine some of such places, live in them for a while, walk their paths without ever stopping for too long. This album reflects how we understand many of these imaginary lands, leaving them behind as they were (are).”

As introspective as that sounds, the opening few minutes of “Northern Winds” make it very clear that these “figments” have been envisioned on a massive scale. There is some formidable terrain to be crossed here – pummeling winds, trembling earth, and yawning chasms that refuse to divulge whether they offer refuge or danger. The plaintive beginnings of “Descending Days”, full of mournful longing, come as respite even as the piece gradually accrues ever more emotional weight.

“Gegenschein” (a German word for the faint brightening of the night sky at the antisolar point caused by reflections of sunlight on interplanetary dust) captures all the sense of awe, wonder, and unfathomable mystery the title suggests. The closing track, “Figments”, is perhaps the most acute realization of the album’s concept as it meshes field recordings of both Athens (home to Gardelis) and Tehran (home to Amini) to create “an imaginary and unruled, yet explored city”. Zenjungle’s sax bursts and wails amidst the bustling cacophony, gradually subsiding to expose a melancholic undercurrent woven by Amini, leaving the listener to contemplate the sometimes arduous but magnificent landscape mapped out by these two incredible artists.

Topology of Figments will be released by Flaming Pines in a handmade gatefold CD edition limited to 100 copies features a cover by Phil Gardelis who is also a fine graphic artist in addition to making music as Zenjungle. At this writing, pre-orders are available.