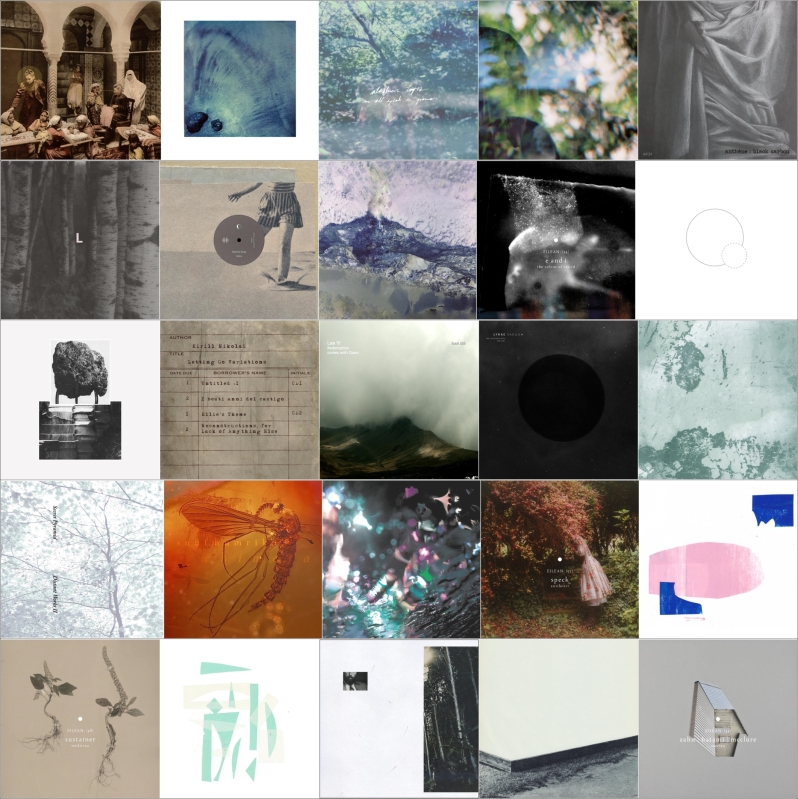 It seems this list can never be big enough to include all the beautiful work done in these genres over the past year, but here are 25 albums that left a lasting impression.

Imbued with that special kind of stillness that only exists in a nocturnal setting. Leonardo Roasado’s oneiric world of opaque shapes and restless sounds in perpetual motion forms a backdrop for Aaron Martin’s delicate ornamentation and empyrean cello parts which tentatively seek and find their way to the most melancholic and affecting narratives, especially in the aching swells of the final coda.

“The noise which comes from the radio sometimes sounds like the sound of the sea” – A tranquil meditation on the sea from literal & metaphorical perspectives. These exquisitely constructed tracks make for an entrancing electroacoustic ambient excursion.

Alaskan Tapes – We All Speak in Poems

Released very late in the year, but unmissable for its comforting poetic beauty and frequent dreamlike shifts between ambient, modern classical, and vocal passages the later provided by the ethereal voice of Chantal Ouellette.

You could not go wrong with any of the three anthené albums released this year, but I was ever so slightly partial to this one, a shimmering efflorescence of quiescent guitar & synth drones that slow down time as they patiently unfold while floating in the ether. The sounds have a lovely sheen and fine veneer of glistening texture like a field of untrodden snow.

There is an elephant in the room and it is personal grief. Rosenqvist explores this concept unflinchingly in a meticulously constructed suite of music that feels intensely personal and yet universally relatable. Evan as the album builds toward the sonic sandstorm of ‘Porcelain’, there is healing and redemptive beauty on the other side.

These ephemeral loops crafted by Clay are delicate suspensions of time in which fragile melodies on piano and violin warble & sing through a finely woven gauze of soft hiss and granular texture. Perfectly suited to the companion art book featuring the images of Katrien De Blauwer on this inaugural release from the IIKKI edition project by the same folks behind Eilean Rec.

Seven tracks that play like a single long form composition with recurring themes and motifs voiced by long cello arcs, stately piano lines, swelling guitars, and mellifluent drones all bathed in warm, translucent haze. Experienced from start to finish, it is wholly immersive.

E and I – The Colour of Sound [Eilean]

Nearly five years after their last release, Emmanuel Witzhum and Craig Tattersall (aka The Humble Bee) return in incredible form as E and I with this expansive release sprawled across 90 minutes and 2 discs in which seven slow blooming pieces explore a beguiling bond between numbers, colors, and music inspired by a kind of kinship Witzhum has sensed between them since childhood.

Glacis – The World Is a Little Lonelier Without You [Fluid Audio]

Offered in memory of his father Sandy who passed away in 2011 the artist collaborates with Ed Hamilton (Dead Light) and Christoph Berg on to create an album delicately poised between melancholy and tenderness. The sense of loss here is palpable, but ultimately the light of healing seeps by the gentle final coda. A truly lovely record.

As with his preternaturally fine debut record, Verwijmeren’s  music once again flows seamlessly from start to finish to create an album that works as more of a single long form piece with the track titles acting only as sign posts along the way marking shifts in tone and mood. The experience is immersive right from the opening as the heavily atmospheric “Last” spins its copiously layered web.

Ambient swells tugged by an undertow of wistful strings lap against the shores of memory in an ebb & flow full of unfulfilled longing. The mood is still and somber, but there is an underlying tenderness and vulnerability lacking any trace of bitterness. The dying rose may slowly be shedding its petals, but deep in the music is the knowledge that it will eventually bloom again…

The bleak opening track, short as it may be, sets a grim tone as if we are emerging from an oppressive and harrowing dark, but the respite of light begins to seep into the dense, crepuscular tones that follow before Yi strips it all down to a one solo piano to pave the way for the resolution the album craves, a gorgeous and wistful final coda with all the redemptive beauty one could hope for.

While most albums on 1631 Recordings land squarely in modern classical territory, this releases serves notice they offer some fine drone oriented works as well. The astronomical references in the track titles hint at the expansiveness of its imaginative and immersive sounds and the music is saturated in the opaque aura of mysterious beauty that seems to be in DNA of Scandinavian ambient music, but each of these six exquisite tracks remain grounded in raw emotion and a soothing abundance of sonic ephemera.

Jake Muir shared that he was watching a lot of older Japanese cinema while making this record and these gracefully unfurling, finespun drones certainly do seem to be at least a little bit imbued with the mystique and grandeur of a samurai epic. The title is from a Javanese word meaning ‘estuary’, fitting for such a immersive and fluid collection of beautifully crafted music.

“Seven transmissions from the Pacific Northwest” – A collection of dronescapes and sketches molded by Amir Abbey from field recordings, strings, piano, tape, synthesizers, and the highly distinctive sounds of the ondes martenot. The profound emotional core resonates, especially on the the majestic centerpiece (‘IV’) and the achingly beautiful final coda (“VII”) which will haunt the listener long after its flickering back-light fades into silence.

Newly launched Swedish microlabel Lagerstätte gets off to a wonderful start with this collection of soundscapes sculpted from highly manipulated vinyl samples with an especially fine and attractive filigree. The macro image of a mosquito in golden amber on the cover perfectly conveys the album’s delicate balance between lucid and the surreal as it seemingly penetrates translucent layers and glides through a dormant landscape that is as serene as it is alien.

Nearly seven years after their eponymous release on 12k, the Australian duo returns with this beguiling tangle of the analog and electronic, recondite in its complexity, yet utterly organic in character as piano, guitar, woodwinds, horns and percussion coalesce into near melodies and almost rhythms among glistening strands and loops of found and generated sounds.

Four rustic idylls spun from gossamer textural fabric, radiant swells of guitar, violin, and halcyon piano lines that twinkle like dappled sunlight shining through a canopy of leaves. Loneliness seems to be a theme of Bondarev’s work and there is certainly a sense of that sort of melancholia here, but overall the effect is tranquil and soothing, like being sung to sleep as the cares of the day dissolve into slumber.

This album might be designed to lull you to sleep but you’ll want to stay awake at least once to experience all of its subtle pleasures.  Side one is a soothing 40 minute live performance by Hüwels starting from a tape loop given to him by Japanese artist Norihito Suda. Side two presents Suda’s rework of the performance which is equally somnambulent but with varying hues and timbres. A patient and beautiful work.

The artist transforms recordings of what some might call “elevator music” into a work of otherworldly beauty in which a sense of the dramatic and the mysterious predominate. Nostalgic, timeless, and modern all at the same time, the music has quite a unique vibe that shares both the colorful efflorescence of modern classical and the opacity of crepuscular drone. Quite the enigmatic journey.

On this outing McDermott but takes a gentle tack away from the gray desolation and dense layers of last year’s memoirs: to dust  (Unknown Tone, 2014) bringing brighter tones and modern classical elements prominently into the foreground to produce something more vivid and translucent and then graces it with sublime cello parts contributed by Aaron Martin. An electroacoustic ambient gem and a delicate aural awakening.

Five melancholic, billowing drones which suspend time while being arced across by undulations of cello and bowed guitar generating a powerful emotional undertow. A purity of intent and profound stillness prevails throughout as the sounds waft through the mind expressing a range of emotion from plaintive to hopeful and earthy to ethereal with just enough subtle contrast in each piece to never lapse into blandness.

Listening to Willamette is like floating on a quiescent sea fed by a confluence of warm ambient drones, ephemeral textures, and soothing timbres woven from piano, strings, and voice. It is impeccable in its construction, uncompromising in its patient commitment to stillness, and awash in tender emotion and an overwhelming sense of nostalgia. This is melancholy and minimalism in perfect balance, exquisitely rendered.

Uwe Zahn (aka Arovane), Porya Hatami and Darren McClure scarcely need an introduction to avid followers of experimental ambient music and an album but any one of them would be a noteworthy event let alone one that involves all three which makes Veerian quite a special recording indeed. A captivating distillation of three diverse, but compatible styles into a cohesive universe of their own creation where the organic and the artificial happily co-exist and focus shifts effortlessly from high-resolution microscopic detail to macroscopic wide-screen vistas, a masterclass in minimalist expression through sound design that constantly reveals new facets and perspectives with each listen.