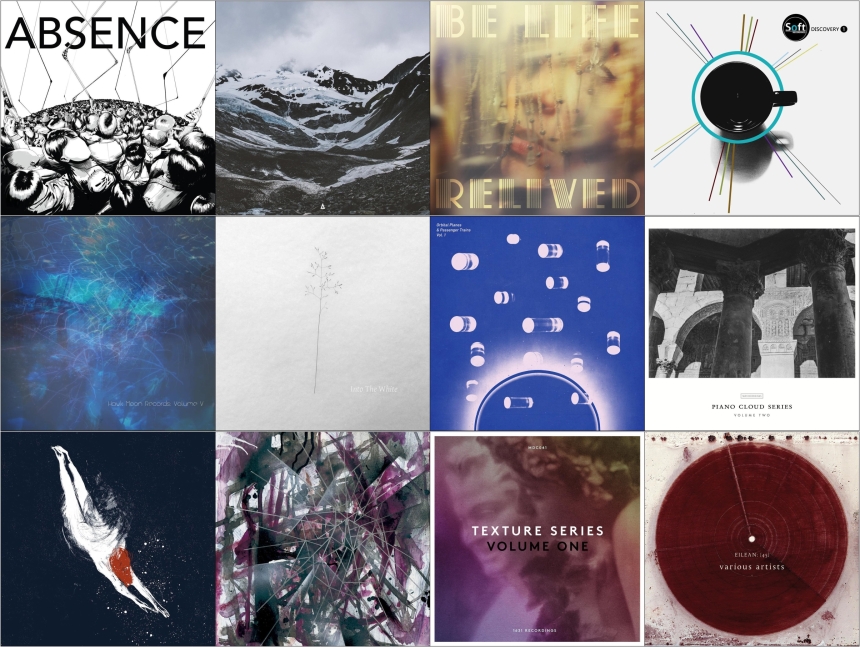 Various artist compilations can be treasure troves of discovery whether it be previously unheard material from a favorite artist or a finding a completely new voice. Often both types of discovery happen on the same album. These twelve offerings comprised some of the most memorable moments of the year in this category spanning works by over 200 artists that you can find nowhere else.

An eye and ear opening release focused on a collective of experimental ambient & electronic musicians from Iran including a number who have been featured frequently here on the blog such as Arash Akbari who curated the collection and Siavash Amini who wrote the cogent & thought-provoking essay of introduction (“We are the voices who choose to be absent from the news and the musical mainstream (and in some cases from the city of our birth) in order to express the complex range of emotions and ideas which make up our lives, as honestly as we can”). Covers a wide spectrum from melancholic, emotive drones and electroacoustic soundscapes to avant electronica and experimental sound design making this a fine introduction to a potently creative group of artists.

For pure and tranquil ambient subtly informed by a dub aesthetic one can hardly do better than the music released this year on the Archives label and I found this collection to be particularly sublime. Eight tracks by eight different artists that coalesce into one beautiful and immersive journey, especially the final twenty minutes which feature Caught in the Wake Forever and Warmth whose Essay was the standout single artist release on the label this year as well.

If Anne Garner’s Be Life was a collection of lullabies, then Be Life Relived is its nocturnal counterpart that lives in the dream-like world unfurled by the ensuing slumber. Her radiantly sonorous voice remains our constant as we drift through a kaleidoscope of lush, hypnagogic landscapes sidereal and surreal with reworks from Christoph Berg, Louis, Mute Forest, High Skies, James Murray, Dean Honer, Lost Vocals, Adrian Carter, and Tom Adams, each one just as gorgeous as the next.

French label Soft Recordings has been rather quiet since the start of the year, but you would not to overlook this aptly titled compilation offers no less than 40 tracks from a diverse group of artists. There is plenty of thoughtful and serene ambient music here, but also quite a few forays into noisier and more experimental territory as well.  Even the most avid followers of electronic music are likely to find some nice surprises here.

A varied and thoughtfully eclectic mix with a warm-hearted spirit (sales and donations go to Naomi House & Jacksplace which provides hospice care to hundreds of life-limited and life-threatened children, young people and their extended families across central southern England) and the roster of contributing artists is exceptional. Intricate and introspective ambient pieces are juxtaposed with effusive beauty as well as uplifting instrumental rock. There is also lush and playful electronica, beguiling folktronica and a pair of lovely modern classical excursions to round it out.

Dronarivm has put out some really nice releases this year some of which you’ll find in the earlier lists, but to kick off 2016 they released this 21 track compilation of wintry ambient and modern classical beauty featuring a stellar list of artists (Dag Rosenqvist, Pjusk, Porya Hatami, Aaron Martin, Wil Bolton, and Hior Chronik just to name a few). Generously offered on a pay what you want basis and featuring tracks you won’t find elsewhere, there is no reason not to add this to your collection pronto.

If there is one thing the eleven year history of Serein tells us, it is that the Welsh label does not put out a release unless it is something special (just consider records like Pine by Olan Mill, Retold by Nest or Charcoal by Brambles). Orbital Planes & Passenger Trains Vol 1, the first installment in a new conceptual compilation series featuring previously unreleased work by sixteen different artists. It makes the ideal companion for the stationary traveler with highlights being the lovely pair of piano interludes by Otto A Totland and the beguiling beauty of “87 Billion Suns” by Strië which was previewed here before the album release.

The first volume in the series set the bar high right out of the gate, but volume two proves to be just as expansive, expertly curated, and exquisitely beautiful as its predecessor, offering twenty tracks by a stellar group of artists each of whose solo work can be enthusiastically recommended.  What elevates this collection to an even higher level is that it is so much more than just a showcase sampler.  A delicately sustained mood and thoughtful sequencing turns it into a cohesive album listening experience.

Modern classical lovers will enjoy this vibrant little collection from London-based bigo & twigetti which includes artists familiar to the blog such as Antonymes, Madeleine Cocolas, and Jim Perkins. The captivating “Little Phase” by Leah Kardos is the basis of a new project called The Exquisite Corpse that spans late 2016 into 2017 which will find artists from the label collaborating with the roster of Moderna Records in a chain of reworks each based of the last.

Nova Fund Recordings is a new label launched this year by José Soberanes and he closed out the year by curating this very interesting 23 track collection of cerebral ambient & experimental music featuring artists as diverse as Bruno Bavota, Arovane, Darren McClure, Mathieu Lamontagne, and Arash Akbari. A great collection to exfoliate the mind.

The first of 1631 Recordings compilations not to center around the piano, the Texture Series covers a broader spectrum of modern classical as well as ambient, drone, electroacoustic, and instrumental folk. Volume One in the series features sixteen artists all of whom will be recognizable to fans of the aforementioned genres. Fragile modern classical beauty, introspective duets, solo acoustic guitar, ethereal soundscapes, and delicate studies in texture are all woven together to create a singular listening experience. A lovely sonic confection.

In what has become their established pattern, Eilean Rec. wraps up four seasons of releases with a collection of previously unheard tracks by each of the artists that had an album out on the label during the year  It is a great concept for providing a retrospective while at the same time offering a new eclectic and often delicate electroacoustic works that stands alone. As always, the artistic design and packaging are second to none.