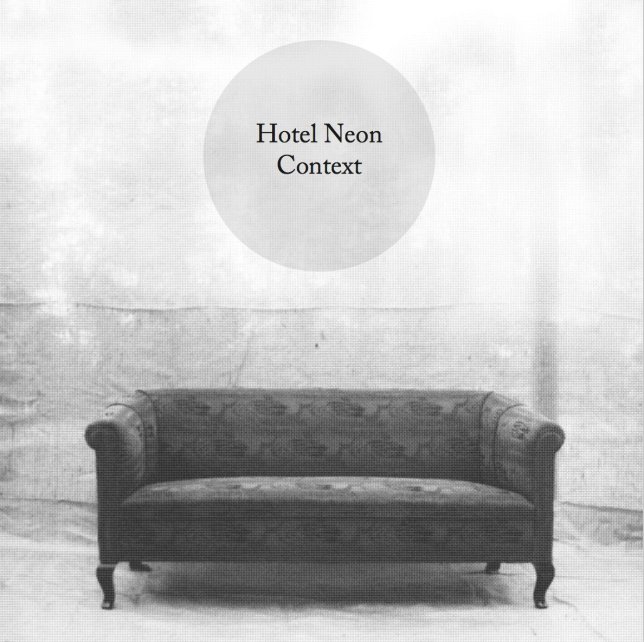 Whoever said “don’t sweat the small stuff” surely was not talking about ambient music. When it comes to this genre, nuances can make all the difference between a bland listening experience and a compelling one. For an outstanding example of the latter, consider Context, the forthcoming third album by Hotel Neon, the Philadelphia-based trio of Michael Tasselmyer, Andrew Tasselmyer & Steven Kemner. Speaking of his own ambient music, Brian Eno once suggested that it should “accommodate many levels of listening attention without enforcing one in particular”, a characteristic very much on display here. It was the band’s choice on this record not to thrust any particular narrative on the listener but rather, as the album title suggests, to provide a context to which they could connect to their own.  Spend an hour or so with these warm, heavily textured crepuscular drones and you are likely to agree it is mission accomplished.

“Context is arguably the only thing that gives a song its meaning in the mind of a listener. The direct message of a track title has disappeared. Vague symbols have usurped them, unable as they are to contain any kind of subliminal message. As a result of this, the listener has been given a lot more freedom to interpret the music as they see fit – they put the ambient washes of sound into a context of their own making. ” – Fluid Audio

Context not only reflects a subtle evolution and maturation of Hotel Neon’s sound, but it is enhanced by the discreet contributions of several others. This includes Matthew Kidd (Slow Meadow) who provided mixing and additional production and Taylor Deupree who mastered the album, two outstanding artists in their own right with well-attenuated ears whose tender ministrations could only add welcome depth and filigree. Japanese drone master Hakobune contributes textures and arrangements to the stunning “4:10 AM” while “6:59 AM” and “8:30 AM” benefit from the integration of ethereal vocals by Lacey Tasselmeyer.  It all adds up to a wholly immersive and extraordinarily atmospheric experience.

Context will shortly be released by Fluid Audio and will be accompanied by artwork from Nieves Mingueza. As those familiar with the label already know, this means a very decorative bespoke limited edition release that will sell out very quickly after it is announced. To be sure to get a copy sign up for the label’s mailing list at the link below.