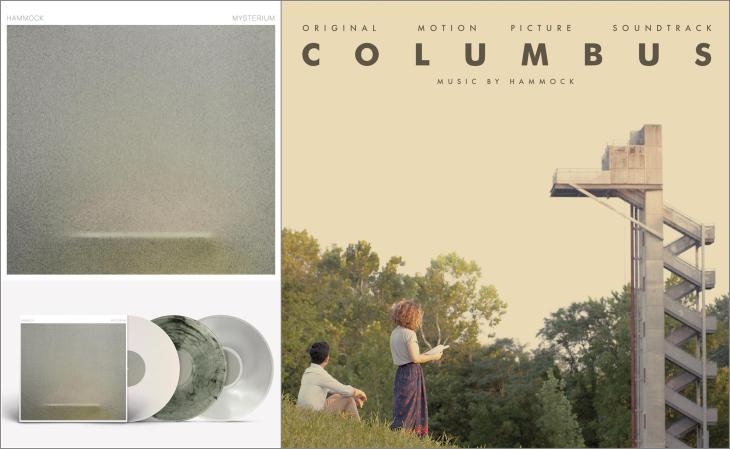 Few artists in the world of instrumental music have a compass as locked on to true north as Hammock. For years, this Nashville-based project of Marc Byrd and Andrew Thompson has  served up a rich sonic feast spanning the genres of ambient, post-rock, and modern classical while resonating with heartfelt, and often heart-wrenching, emotion. Perhaps what they are capable of was summed up best and most succinctly in a comment to one of their recent videos where the listener said “Hammock has this way of telling you, ‘Everything will be okay.’, in the most beautiful way possible”. And in 2017 we have a double helping of new work from the band, an original motion picture soundtrack and a full-length studio album.

The soundtrack is for the critically acclaimed indie film “Columbus” written & directed by Kogonada  and starring John Cho and Haley Lu Richardson along with Parker Posey, Rory Culkin, and Michelle Forbes. Against the backdrop of a quiet mecca of modernist architecture, the story unfolds of an unlikely bonding between two stranded souls, a son coping with the illness of his estranged father and a young woman who desperately admires the work that surrounds her but won’t allow herself to pursue the dream. The music is Hammock at their most pensive and restrained, perfectly suited to the nuanced narrative and elegant if slightly aloof minimalism of the architectural forms around which it revolves. The tracks titles themselves are referential of the figures whose work permeates the visuals of the film, names such as Eero Saarinen, Richard Meier, and I.M. Pei.

The month of August not only saw the introduction of “Columbus” into theaters around the country, it also saw the release of Mysterium, a moving new full-length studio record by the band. The album is a requiem of sorts, a memorial to Clark Kern, nephew and son-like figure to Marc Byrd who died last year after a battle with childhood disease NF2.  The album effortlessly fuses modern classical, ambient, and choral music to present a work of otherworldly beauty rooted in deeply felt grief infused with loving appreciation. The record features contributions from Berlin mix engineer Francesco Donadello (Winged Victory for the Sullen, Ólafur Arnalds), Peter Katis (The National, Jónsi, Interpol), and Hamburg orchestrator Roman Vinuesa (“Iris,” “Umrika”), who transcribed scores for the Budapest Art Choir as well as a collaboration with fellow label artist Slow Meadow.

Perhaps more than any other album, Mysterium exemplifies what has earned the band such a devoted fandom and the staying power of their music. These are not just beautiful sounds meant to serve as shallow comfort. Rather they are intrepid confrontations of the deepest pain and the most troubling existential questions we face, a tireless sonic quest search for healing and redemptive beauty. Be careful when and where you first listen to this; the floodgates will open before it is over.

Mysterium is available on CD and in two vinyl editions which can be ordered on the Hammock Bandcamp site. Please also note a link is provided to the Clark Kern Memorial Scholarship Fund where you can learn more about Clark, NF2, and make donations.