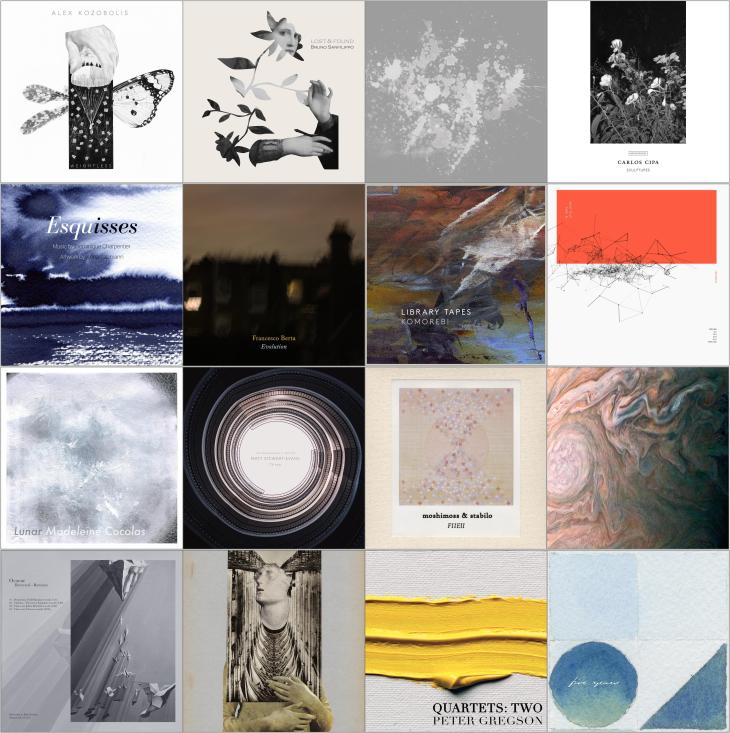 The EP is often overlooked when it comes year-end retrospectives, but this format can provide us with some very special musical moments and here are some from 2017 that you might not want to miss.

A musician as well as a filmmaker and photographer, Kozobolis saw his first physical release in this beautifully designed EP with an elegant framework that presents four piano sketches which are reworked in reverse order by guest artists Tom Adams, Siavash Amini, Hedia, and Transept. Weightless is pure minimalism and poignant austerity expressed in a perfectly balanced and symmetrical form.

Four songs described as “once buried and lost in other collections” that have been curated together to create a new sound and feel. Along with a fifth bonus track that was previously unreleased they comprise an austere and deeply contemplative collection of captivating resonance, stark counterpoint, and expressive minimalism that will be welcomingly familiar to followers of Sanfilippo’s work.

It may only be two tracks combining for little more than 6 minutes, but those minutes are filled with an ethereal, shimmering beauty thanks to the pristine guitars of the Broca Ensemble and abstract vocal work of Georgina Brett. A brief, but quietly spectacular diversion like stumbling upon a stunning open view on a wooded hike.

One of the last releases of the year on 1631 Recordings, this exquisite collection of seven solo piano compositions from the Munich-based composer & multi-instrumentalist. While he works on a more expansive full-length album for 2018, this muted and contemplative set is a lovely way to tide us over in the meantime.

Consists of five songs each of which was developed in less than two hours. Charpentier chose this format as an experiment in form and a personal challenge. While compressing the creative process into a fixed time always risks an uncertain outcome, in this case it produced an enchanting quintet of piano-based pieces with a touch of melancholy and a touch of musette so as to weave a spell of melancholic and nostalgic romance in the space of twelve minutes.

At the beginning of 2017, Francesco Berta challenged himself to publish new creative work at the pace of at least once per month throughout the year and he delivered on that with a dozen new Bandcamp releases over the course of the year. Take your pick – they’re all worth your time – but a great place to start is the very first EP which embraces moody & cinematic atmospheres juxtaposed with clever electronic elements.

A quiet little release on 1631, but one not to be missed as David Wenngren is joined by cellist Julia Kent in developing a melodic composition in five parts traversing a variety of moods & textures. Immersive and atmospheric.

Previously recording under the moniker Light of Woods, M. Grig released this gem of an EP inspired by a personal journey from Seattle to Durham, North Carolina where he is now based. Also a composer for films, the artist lends a touch of the cinematic to these pastoral, melodic pieces finding a way to give them narrative scope even as he mines emotive elements from the instrument’s melancholic twang.

Like a good sci-fi novella, Lunar is both compact and epic at the same time, a grand adventure inspired by and including NASA sound samples with a retro futuristic vibe richly constructed from layers of whooshing and oscillating synthesizers and propelled by a cinematic sense of narrative. In the space of these five tracks, Cocolas evokes both the wonder and haunting isolation of mankind’s tentative and intrepid explorations of the solar system.

The London-based pianist, composer, & producer turns in a truly lovely and colorful set of solo piano miniatures finely poised between reflection and romanticism. A delightful listen.

A split EP featuring two leading lights of the ambient & experimental music scene in Japan. moshimoss (Kosuke Anamizu, based in Yamanashi), offers fresh edits of two of his older songs of exceptionally delicate and ethereal construction while stabilo (Yasutica Horibe, based in Hiroshima) captivates with a pair of pensive, but sumptuous drones. The aesthetics may be different, but they are highly complementary and the four interwoven pieces form a single suspension of time and a sublime aural escape.

Mt Accord is a London-based project that should get the attention of those who enjoy ambient & drone music texture with field recordings and tape effects. A Day is a modest, but highly rewarding collection of  billowing oscillations with fine-grained texture and a warm nostalgic feel described by the artist as “late-night/early morning meditations” and “a goodbye to a home”.

French composer & sound designer Ocoeur (Franck Zaragoza) enlisted the services of Christoph Berg, The Green Kingdom, and Julien Marchal to create this intended prologue to his 2016 full-length album Reversed, serving up an entrancing quartet of reworked pieces, one of Zaragoza’s own creation and the remainder from his hand-picked team of collaborators. Works as a short, but deeply satisfying diversion as well as a prelude to its predecessor’s elegant fusion of ambient electronica and piano-centric modern classical.

øjeRum – He remembers there were gardens [KrysaliSound]

Originally released on cassette in 2013, Italian label KrysaliSound has remastered and reissued a mesmerizing long form composition by Danish collage artist & musician Paw Grabowski under his artistic pseudonym of øjeRum. An undulating, hypnagogic organ-based drone, He remembers there were gardens was conceived as an alternate soundtrack to the 1962 “photo-roman” (photo-novel) La Jetée by Chris Marker which is still recognized as a unique and highly influential experimental cinematic work. The rich organ tones, repetitive patterns, and plaintive melancholy can be enjoyed alone or along with the film to provide a unique viewing experience.

The London-based cellist & composer actually released two volumes in this outstanding series featuring a quartet of guest musicians, one over the summer and one in the autumn. Forced to choose just one for the list, I am just a bit partial to the slightly more somber & experimental second volume which sees Gregson adding synths to the mix, but I don’t advise wasting any time trying to choose. Modern classical fans will unquestionably want to have both.

Five Years traverses quite a bit of previously unexplored sonic territory for the percussion-oriented band as they show a penchant for developing beguiling, color saturated soundscapes, densely layered and studded with subtle glitch elements and a plethora of vocal & abstract percussive textures. Especially suited for nocturnal listening, a fine soundtrack for watching over the lights of a sleeping city in the company of one’s own thoughts.