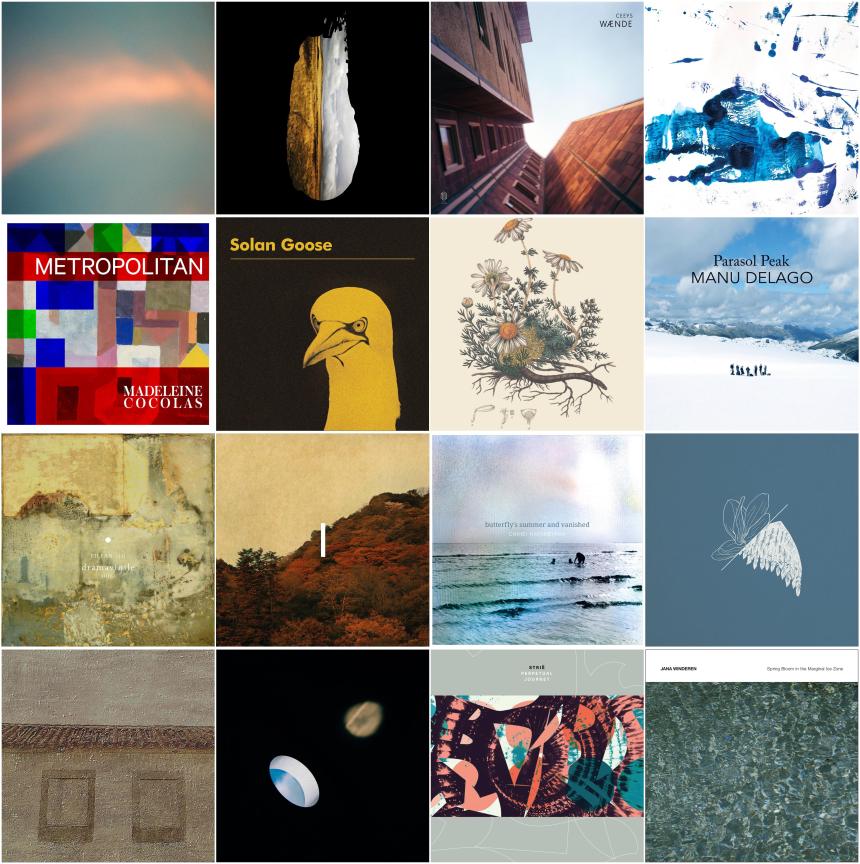 Each of these sixteen albums is conceptually, thematically or musically connected to places or moments in time. While this is a somewhat common motif in instrumental music (ambient in particular), it is absolutely integral in these outstanding works released in 2018. Some are personal narratives and some are depictions of landscape either real or imagined. Others are sonic interrogations or interactions inextricably linked to the locations where they were formed. Whatever their nature, all of them proved captivating and memorable. One might say they represent the very essence of stationary traveling…

Brian Allen Simon aka Anenon packed up his instruments in the spring of 2017 and left behind a roiling political/cultural climate on the west coast of the United States for the serene & picturesque rolling hills of Tuscany, home to centuries of artistic expression and enviable provincial life. There, in a makeshift attic studio on the third story of a 16th century villa in the small town of Palaia, he embarked on the month-long musical odyssey which yielded Tongue. With soprano sax, piano, synthesizer, and field recordings Simon fabricates a place all his own, a fusion of two worlds where frantic modernity and pastoral beauty coexist and where free jazz and loose experimentation do not contradict lush, ambient textures.

As both a composer and creative technologist, Richard J. Birkin doesn’t just create static recordings. Rather, he creates compelling interactive experiences. Such is the case with the work he did to enhance author Jon McGregor’s book tour in support of Reservoir 13, a novel which examines life in an English village in the days. months, and years following the mysterious disappearance of a teenage girl. The music Birkin composed for the project, which was based on a Derbyshire folk song, was intended to accompany live readings and was incorporated in an interactive app that allowed audiences to make their phones part of the performance. Birkin then headed to the studio with a string trio and the avant instrumentalists of Haiku Salut to create a wonderful stand-alone listening experience in EP form.

Taking their name from a neologism that merges the names of their respective instruments (cello and keys), brothers Sebastian and Daniel Selke follow up their exceptional debut Concrete Fields with the next installment in a triptych centered on the experience of growing up in the prefab estates of former East Germany and navigating years of dramatic personal, political, & cultural change. Perhaps a little more taut and restless than the first volume, Waende is nevertheless a mesmerizing chronicle that manages to reproduce the uncertainty and “vague melancholy” of the period on its own minimalistic terms while being punctuated by arresting moments of austere beauty.

The third and final installment in Lucy Claire‘s “Works” series is a beautifully conceived EP that takes her music out of the confines of living room and studio to integrate with a variety of soundscapes. In a rather fresh take on the concept, she has taken an especially interactive approach which, when combined with her keen sense of narrative and use of binaural recording techniques, creates a series of vivid, immersive and pleasantly disorienting scenes through the layering & juxtaposing of various field recordings collected from both pastoral and urban settings.

A highly engaging intersection between modern art, generative music, and compositional forms inspired by the composer’s fondness for The Metropolitan Museum of Art developed after a recent relocation to New York.  Each track on the album represents a distinctive work of modern art built around sounds generated by custom software programmed by Gregory Long specifically for this project. Stand out moments include the simple, elegant geometry and soothing color gradients of “Hartigan, Blue Bathers”, the muted abstract beauty of “Rothko, No. 16” or the percussive harmonic dance of “Pollock, Autumn Rhythm, No. 30”.

Erland Cooper takes us on a soaring journey far from the urban landscape surrounding his London studio to his native Orkney, a breathtaking locale steeped in folklore, myth, and nautical culture. Solan Goose prominently features the area’s avian fauna and the local Orcadian dialect which reflects the intertwining of its Scots and Norse lingual heritage. The crowning touches that make it so quintessentially transportive are its elements of native authenticity – the song and chatter of the namesake birds woven seamlessly throughout the sonic canvas and fragments of interviews taken from local radio show archives. By the end, the deep fondness and awe the composer has for this place has transferred to the listener in wondrous cinematic fidelity.

A quietly stunning collaboration between a pair of sound artists from separate continents – Dalot (Maria Papadomanolaki), originally from Greece and currently based in London, and Sound Awakener (Nhung Nguyen) from Hanoi, Vietnam.  Imaginatively conceived and elegantly presented, Little Things presents a pastiche of field recordings, sonic artifacts and divergent personal narratives transfigured into wondrous inner landscapes that become wholly immersive for the listener. And the exquisitely artful packaging from Fluid Audio definitely deserves a mention as well.

A pioneer of the hang, or handpan, Manu Delago has collaborated with an impressive and diverse array of artists including Björk, Anoushka Shankar, Ólafur Arnalds, and the London Symphony Orchestra while developing his own body of work fusing together world, electronic, and neoclassical music in eclectic fashion. Taking this concept to new heights (pun intended) is Parasol Peak, an ambitious project in which Delago leads an ensemble of seven musicians on a mountaineering expedition in The Alps performing compositions in different locations and varying altitudes. In juxtaposition to the forbidding backdrop where it was made, the music is exotic, vibrant, and even exuberant at times. Nothing less than a celebration of creativity and human spirit.

Under the moniker of Dramavinile, experimental musician Vincenzo Nava joins the roster of artists on the wonderful Eilean Rec. project with this electroacoustic ambient journey named after the rift formed between the North American and Eurasian tectonic plates in Thingvellir National Park southwest of Iceland. This location is said to have the clearest water in the world thanks to decades of filtration through porous underground lava. Atmospheric drones, shimmering waves of guitar, and rich textural filigree make for a deeply immersive experience imbued with a sense of wonder fitting its theme.

In what may be the most charming entry yet in the IIKKI editions project, Argentinian musician Federico Durand lends his delicate, pastoral touch to accompany the gorgeous photography of Albarrán Cabrera (Anna Cabrera and Angel Albarrán) in an exquisite dialog of electroacoustic sound and sumptuous imagery.  Soothing tones and gossamer textures create an inviting, oneric world of fragile beauty.

It was another prolific year for Chihei Hatakeyama and one could easily recommend any of his sweeping guitar generated soundscapes without hesitation, but there is a particular magic and grandeur to the latest of his records delving into ancient Japanese history. Butterfly’s Summer and Vanished imagines a seaside journey to Japan through the eyes of a messenger of the Chinese Emperor in the 7th century during the age of Empress Suiko. Gorgeous, efflorescent drones convey the stillness & beauty of the sea while blossoming with quiet grandeur befitting the pageantry, sense of adventure and romanticism of the theme.

An act of preservation as well as exploration, Memory Sketches gives form to personal memories of the artist drawn from a period spanning roughly twenty years – bringing a grandmother to the hospital in an RV, crossing the inner-German border in Bornholmer Street for the first time shortly after the fall of the Berlin Wall in 1989, coming home from graduation, a father’s passing and funeral. The filigree is exquisite at every level and by the time the final coda comes, invoking the image a cemetery car park shrinking in a rear-view mirror, so do the tears.

2018 was a full year for McDermid which included the second & third volumes of his deeply personal triptych dealing with the terminal illness and passing of his sister Harriet (Tonal Glints on Krysalisound and Kern-Host on Whitelabrecs) and the launching of a new podcast (This Exquisite Pain) all while actively supporting and encouraging many fellow artists on social media. Not to be overlooked is also this beguiling narrative which imagines an eerily abandoned shop containing a mysterious book hiding photographs of seemingly ageless young women appearing in capital cities around Europe over a period of decades.

Note: Read more about McDermid and the album’s mentioned above in our interview with him published earlier this year.

The magic that composer Michael Price brings to some British television’s finest dramas such as Sherlock and Unforgotten is also evident in his solo projects. Case in point is the ambitious Tender Symmetry recorded in iconic National Trust locations across England with collaborators including soprano Grace Davidson (featured on Max Richter’s Sleep) and Shards (the choir that also appears on Nils Frahm’s All Melody). Richly cinematic and haunting.

“For Tender Symmetry, I stopped admiring and started participating in these buildings. This began as an exploration of writing and recording out in the world beyond the studio. I am interested in where we build our homes in an increasingly virtual world and the spirit of place we feel as we walk our local streets, our schools, temples and public spaces. Taking inspiration from a place, and the stories it told, then going back to that place to record, sometimes in less than ideal conditions, made the two-year adventure much more like shooting a film than making a record.” — Michael Price

Inspired by the true story of Laika, a stray dog sent into space by Soviet Russia in the fifties, Strië (who we now know is Polish composer, producer and multi-instrumentalist Olga Wojciechowska) captures the vintage mystique of early 20th-century space travel while extrapolating the journey of its humble canine protagonist into much larger existential themes. A true sonic alchemist unbounded by genre, she masterfully balances cosmic scale, intimate introspection, and elaborate sound design to create a timeless and mesmerizing journey.

No casual field recordist, Jana Winderen ventures intrepidly into audio environments which are both difficult and challenging to access to reveal the sounds of the natural world that the vast majority of us would never otherwise hear. Spring Bloom in the Marginal Ice Zone is the latest installment in a series of works focused on hidden worlds of underwater life in which literally immerses the listener in a teeming but increasingly fragile ecosystem that exists in the fluid border between open ocean and the sea ice. The digital album offers both a monitor mix suitable for a sound installation and a headphone mix suitable for individual journeys as well as a short interview with marine ecologist Carlos Duarte.

“The listener experiences the bloom of plankton, the shifting and crackling sea ice in the Barents Sea around Spitsbergen (towards the North Pole) and the underwater sounds made by bearded seals, migrating species such as humpbacks and orcas, and the sound of hunting saithe and spawning cod. All depend on the spring bloom.”