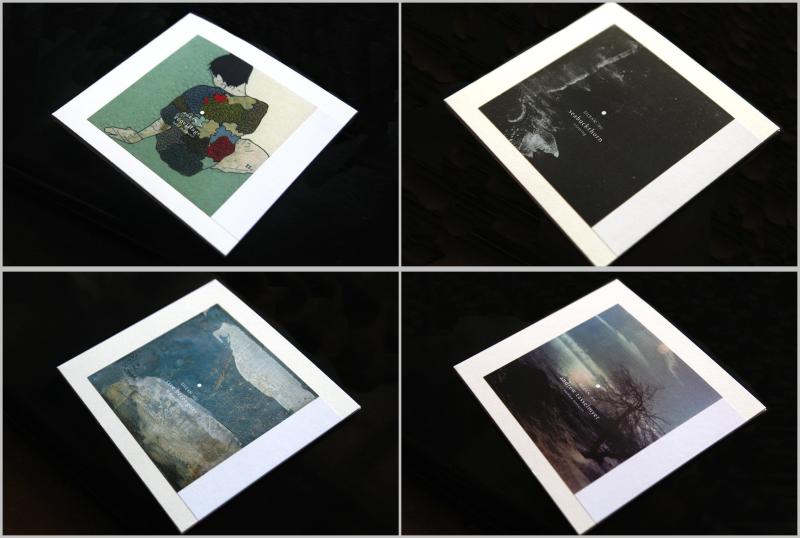 Eilean Rec. is a non-profit independent French label founded on a rather original concept – a map of an imagined land populated with 100 points each of which corresponds to an album release. A little over five years since it began, that map is nearly complete and during that time, the label has introduced us to so many excellent artists and albums while gently stretching the boundaries of what listeners might expect from ambient and electroacoustic music. I confess a little sadness in seeing it drawing to a close, but the finite nature of this project is an essential part of its aesthetic and there is no doubt those involved will move on to other equally interesting creative endeavors. Presented here four recent Eilean releases that I’ve been enjoying during my summer listening by Ecovillage (Sweden), Seabuckthorn (UK), Ciro Berenguer (Spain), and Andrew Tasselmyer (USA).

Swedish musicians Emil Holmstrom and Peter Wikstrom have been working on different music projects together since 2001, but it was a 3 month-long journey around South Asia some years later that inspired them to create Ecovillage. Hold My Hand is their sixth album overall, but it is their first on Eilean which is somewhat fitting as the duo feels like it represents a new sonic direction for them. Holmstron & Wikstrom are joined by an impressive list of guest musicians who add color to this lovely and often lush collection of out-of-time daydreams & reveries with additional piano, guitar, violin, cello, and trumpet.

“Even though the album “Hold My Hand” is Ecovillage sixth album we feel in some sense its our first. With a more letting go and less is more attitude a new sound has arrived. To rather remove than add.  We feel to have finally found our specific roles in the band after a lot of trial and error. A more minimal and mature sound is definitively heard throughout the album. “

Seabuckthorn is an alias used for the solo work of English acoustic guitarist & multi-instrumentalist Andy Cartwright who uses the techniques of finger picking & bowing combined with various open tunings to create experimental compositional and ambient works with a uniquely primitive feel. Having grown up in Oxfordshire, Cartwright studied sound engineering in Cornwall and then lived in the cities of London, Paris & Bristol, but now resides in the southern Alps where he draws musical inspiration from the mountainous landscapes of the region.

Compared with the British folk-leaning melodies of Turns (Lost Tribe Sound, 2017), Crossing, which was developed while Cartwright was anticipating the experience of fatherhood, is a more atmospheric and abstract affair with a serrated edge. It is at once hauntingly primitive and vividly cinematic with a visceral, elemental feel as he coaxes a variety of sounds from the resonator guitar as well as banjo, clarinet, bass synth & percussion. This is the work of an artist who has truly found a unique instrumental voice.

Ciro Berenguer is a composer and multi-instrumentalist born in in Argentina and now residing in Barcelona, Spain. He draws on a diverse, global array of influences spanning folk, jazz, and ambient forms. El mar de junio [ the sea of June] is a set of compositions which Berenguer says seeks to reflect in fleeting form what he learned and experienced during the past six years of sound experimentation. In it’s delicate filigree and melancholic musings are woven the threads of memories both personal and musical. El mar de junio is an extraordinarily warm and thoughtful work full of light and muted color like the sea that inspired its name.

“Six years of mixed emotions and memories: the magical islands of the Paraná delta river in Argentina, the scent of old Pyrenean forests, an abandoned garden by the seaside, two trips to Belgium to play music and make new friends…At the request of Mathias, in a way also a mentor of this album, who invited me to send him to his home in Brittany something that represented “soil” for me, I decided to send him, by postal mail some rosemary leaves, recently flowered on my balcony. Rosemary, whose name in latin is rosmarinus, means “dew of the sea”, in reference to its beautiful blue flowers, which reminded me of the Mediterranean sea, the background colour that unifies these memories”

In addition to making music as part of Hotel Neon along with a wide variety of collaborative projects, Andrew Tasselmyer has been creating a growing body of solo work centered around his field recording practice. Surface Textures is his first Eilean release and makes for a truly immersive listening experience as he patiently explores beautiful liminal spaces between ambient soundscapes and field recordings captured in Japan, China, Europe, and the USA from August 2017 to May 2018. Hotel Neon band-mates Michael Tasselmyer and Steven Kemner contribute additional textures on several of the tracks, so those who appreciate their work will find this album very complementary to their style while offering something a little different at the same time.

“The album is a soundtrack to specific, ordinary experiences that somehow became permanently lodged in my memory of those places. It is an album focused on painting a picture of unnoticed corners of the world, and a reminder that sometimes, the greatest satisfaction is found by looking past the immediate and into the peripheral textures of a place.”