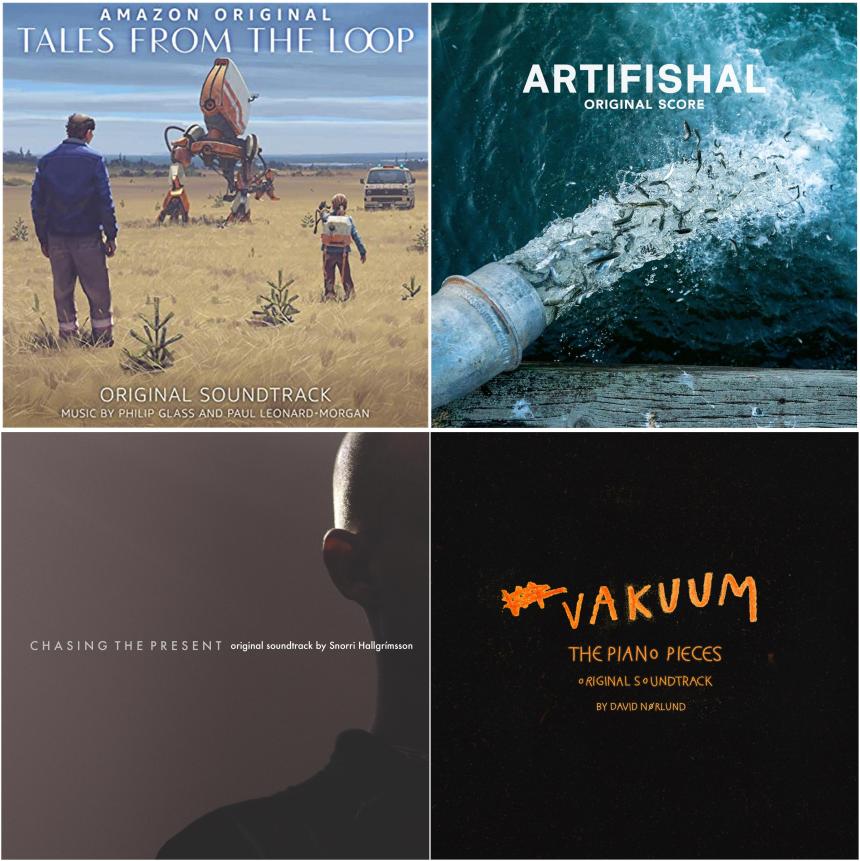 If you are reading this blog, chances are you’re an avid music lover and the kind of person who is just as likely to discover a film or television show after hearing the soundtrack as the other way around. Or, perhaps, you even enjoy certain soundtracks as complete listening experiences on their own without ever watching the productions they scored. The four releases featured here are those kinds of albums for me an I have a feeling you will enjoy them as much as I have. Featuring original scores composed by Philip Glass & Paul Leonard-Morgan, William Ryan Fritch, Snorri Hallgrímsson, and David Nørlund.

Tales From The Loop by Philip Glass & Paul Leonard-Morgan

Of the four albums in the group, this is the one for which I have also watched the show. It had me at theme’s forlorn opening bars waltzing across a solo piano. The idea of this tenderly melancholic music serving as the theme for a science fiction series based on Swedish artist Simon Stålenhag’s striking crowd-funded art books was irresistible, but I am glad I got to know the music first.  In fact, this score co-composed by Philip Glass and Paul Leonard-Morgan, which proves eminently listenable on its own, serves a crucial role in not only supporting the narrative, but letting the viewer into the souls of the characters.  Fair warning to those who have not watched the series and expect to do so – you may want to stock up on the tissues.

Tales From The Loop is available from Hollywood Records on most digital and streaming platforms (see link below).

An artist of rare breadth, depth, and inentiveness, William Ryan Fritch is in epic form on his score for Artifishal, a film that explores wild salmon’s slide toward extinction and the threats posed by fish hatcheries and fish farms. Beautifully composed and meticulously orchestrated, there is something that remains wild and untamed in this music that evokes a sense of nature’s wonder while capturing the pathos of the situation that so perilously endangers its precious resources.

Artifishal is available digitally via Lost Tribe Sound where you can find much more by Fritch, including his stunning 2-volume 2019 release Deceptive Cadence: Music for Film and several more on the way as part of the label’s new Fearful Void series which starts this summer and will run to June of 2021. Note that 25% of the sales of this release go to the Native Fish Society.

Chasing the Present by Snorri Hallgrímsson

Mark Waters’ feature length documentary called Chasing the Present tells the story of a materially successful young man who suffers from debilitating anxiety and embarks on a journey of self-discovery. While I have not seen the film and may not necessarily be in congruence with all of its spiritual aspects, Icelandic composer/producer Snorri Hallgrímsson (along with Karl James Pestka on violin & viola and Unnur Jónsdóttir on cello) certainly creates a gorgeous web of introspective beauty with this suite of music capable of assuaging the most anxious of souls.

Chasing the Present is available as a digital/streaming release from Montreal’s Moderna Records.

A beautiful and moving collection of tracks by award-winning composer David Nørlund for a Danish production about three young people going through “turbulent hardships, during a time of life, normally known as a time without worry”.  While he created some additional electronic ambient music for the series which remain unreleased for now, this collection of poignant piano pieces radiates empathy and compassion beneath a deeply affecting sense of melancholia.

Vakuum (The Piano Pieces) is available as a digital/streaming release on the composer’s Bandcamp page.