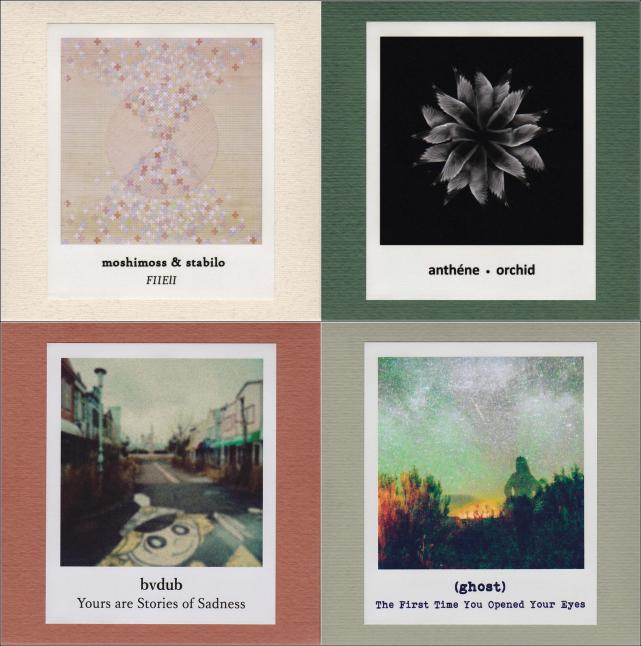 Sound In Silence is a small DIY record label based in Athens, Greece that has been releasing limited editions presented in collectible handmade packaging since 2006.  Featured here are four of their most recent releases by moshimoss & stabilo, anthéne, bvdub, and (ghost). I also recommend browsing through the rest of their Bandcamp catalog where you’ll find gems by artists such as Wil Bolton, Caught in the Wake Forever, Good Weather for an Airstrike, and North Atlantic Drift.

FIIEII is a split EP featuring two leading lights of the ambient & experimental music scene in Japan. moshimoss (Kosuke Anamizu, based in Yamanashi), offers fresh edits of two of his older songs of exceptionally delicate and ethereal construction while stabilo (Yasutica Horibe, based in Hiroshima) captivates with a pair of pensive, but sumptuous drones. The aesthetics may be different, but they are highly complementary and the four interwoven pieces form a single suspension of time and a sublime aural escape.

Whether making music as anthéne or with Mike Abercrombie as part of North Atlantic Drift, Brad Deschamps has a penchant for shimmering tones and glacial beauty and, fortunately for us, he has been very active recently on both projects. Orchid adds seven spellbinding new pieces to the anthéne catalog, each a study in ambient guitar alchemy, beautiful sound shapes, and discreet use of textural elements which all coalesce to sustain a deeply introspective and nostalgic mood. This one might be his most beautiful yet.

bvdub – Yours Are Stories of Sadness

Those who know the work of Brock Van Wey as bvdub might be surprised one of his albums in this company, but Yours Are Stories of Sadness is a notable detour from his epic, emotionally effusive beat driven excursions into purely ambient territory and what a memorable journey it is. The album offers no less than 19 songs each a musical interpretation of a single memory, a moment when Van Wey was approached while singing karaoke in a Chinese bar by a woman who said to him “When I saw you walk in, I knew yours was a story of sadness.”  His gift of melody, lush sonic layers, and emotional narrative is no less strong here, just more muted and introspective as he creates one of the most memorable, immersive, and expansive ambient albums you are likely to come across anytime anywhere.

Originally a digital only release, Sound in Silence created 300 copies in a hand-stamped 127mm x 127mm 360 gsm reddish-brown cardboard envelope with the front cover image printed on a polaroid style photo paper and an insert sheet containing tracklist and information printed on a 160 gsm dusty purple cardboard. Unfortunately at this writing they are all sold out, but digital copies can be ordered from the artist here.

(ghost) – The First Time You Opened Your Eyes

(ghost) is a solo electronic project of Denver based musician Brian Froh, another artist who shows us a more atmospheric and beatless ambient side to his music compared to what he has released on other labels such as n5MD. The First Time You Opened Your Eyes is a single, sprawling long form piece of about 34 minutes in length, a lush, warm drone that slowly accumulates its layers and effloresces into more melodic territory with haunting overtones. The accretion of all these elements combine to form a surprising emotional impact. A modest, but very accomplished gem in his catalog that should not be overlooked.